I am researching why companies are involved in open-source. I started with a focus to read-only papers, but in the end, I am moving probably also into other types of sources (blogs, twitter …)

Below are some quotations I find very interesting along with some of my thoughts regarding them:

“Why do commercial companies contribute to open source software” #

Here are some highlights from “Why do commercial companies contribute to open source software?”, 2012 - along with my personal notes:

"We identified three main drivers for contributing to open source, which are (a) selling complimentary services, (b) building greater innovative capability and (c) cost reduction through opensourcing to an external community"

I think if a company decides to do an open-source project or to support an open-source initiative, this should be the primary driver. Unless this is the main driver, then there is a significant risk that the project not to be adopted by the community as it might appear “too commercial”. This is more of perceived risk as OSS - the broader term - does not automatically imply non-profit objectives. A company can make great open-source software and still be a for-profit company following a specific business model. See examples of Gitlab.org, Automattic.com, and Canonical as companies who have their central core open-source or examples of Github, Adobe, Google, Facebook, Linkedin.
See Apache Kafka, which was developed initially by Linkedin and then handed over to Apache Foundation. I think this contributed a lot to the sense of belonging into the open community and success of now Apache Kafka.

"The inherit innovative capability of open source software means that the product will add new features faster, and makes it a good fit for users that are looking for the latest innovative solutions to their problems."

A more significant, wider, diverse community that could come with putting your project/code into opensource could be an excellent driver of innovation. It is tough for a company to compete with the world of ideas and creativity that this kind of audience has. Open source also has a significant advantage here as it allows developers and users (who can develop) to contribute to it without any middleman directly.

"The innovation process in the software community is cumulative therefore the sooner code is released, the sooner it will serve as a foundation for new innovations"

This is a very significant improvement for speed of innovation because as soon as the code is into the world, it starts getting new ideas and mutations. It is imperative in open-source to release as often as possible so that any fellow member of the community can see and contribute.

Here are some learnings from “Open Source Software from Commercial Firms - Tools, Complements, and Collective Invention”, 2004” - along with my personal notes:

"A final learning is that firms should rethink the habit of keeping private as much of their IP as possible – giving it into the open source domain may be more profitable, despite the unusually weak protection of intellectual property"

For me, this strategy - of open-sourcing IP - it fits very nicely into a kind of Blue Ocean business strategy. This means to look at how to use the creative work in a way that looks more like a non zero-sum game. Please take a look at Tesla’s release of their patents and some reasons why this move is right for Tesla’s business. You cand find multiple analysis (example: one, two) about how this move is possible a very good strategy for them.

"The authors argue that innovation in software is "sequential", that is, every innovator builds upon earlier innovations by others. Their model analysis shows that a regime of very strong intellectual property protection (i.e., software patents) actually stifles innovation, leading to a reduction in social welfare."

Here are some highlights from “Open Innovation Generates Great Ideas, So Why Aren’t Companies Adopting Them?”, 2017 - along with some of my thoughts:

"Successful designers took five strategic actions to cultivate flexibility and trust. Some of these strategies might sound as if they have been lifted from the [agile](https://hbr.org/2016/05/embracing-agile) or [lean development playbooks](https://hbr.org/2013/05/why-the-lean-start-up-changes-everything), but they are being used with a different end in mind: not to drive efficiency but to create consensus"

These 5 strategic actions were:

I am observing two important things here: a. A confirmation that it is a very lucrative practice to engage the customer early and deeply. b. When thinking about how to engage the customer and collaborate seems like no matter the framework, some things remain essential and should always be integrated into your own SDLC process/framework: integrating multiple points of view, delegating, collaborating with customers early, using a prototype to validate solutions …

"Designers at the successful agencies created a large, dense network of contacts with people at all levels of the client organization instead of working with a single point of contact."

I think this is a fantastic idea to think about creating a network of people from multiple levels of an organization when trying to help the organization solve a problem. It makes so much sense to see this as a network and make sure it has multiple levels. As the organization grows, its problems regarding culture or products need a wider perspective, an need to integrate multiple stakeholders with different needs. Some of them are present in your project from the beginning (usually the leadership), but some of them don’t participate. You actively need to add them and engage them.

From my experience with idea generation techniques, some of the best predictors of success are: having a diverse team, having an extensive overview, the ability to think about multiple perspectives at the same time. One sure way to increase those is to open source your work and invite the world to contribute to it. Nothing adds more diverse opinions than putting your project out there in the open. It is very costly to sustain the creation of new ideas only internally. It might work, but it is a strategy that only big organizations can afford because, in general, it needs dedicated people, effort, and space.

Here are some exciting findings from “Survey: Open Source Programs Are a Best Practice Among Large Companies”, 2018 - along with some small notes from me:

"More than half of respondents (53 percent) across all industries say their organization has an open source software program or has plans to establish one."

I’m already seeing many companies involving themselves in open-source. I think the trend is growing. I also see a lot of new startups adopting an open-source business model. I think this is a smart move as it allows them to compete with big businesses in terms of effort and innovation. What I love a lot about these startups is that they are very open not only about their code but also about their businesses, about their practices, and about how they are approaching software development. Twitter, Github, and Gitlab are, in this regard, places where there is much wisdom on how to create such a model.

"Large companies are about twice as likely to run an open source program than smaller companies (63 percent vs. 37 percent.)"

As the competition grows big, it is the logical conclusion for big companies to run open-source programs. For some of them, it is a way to escape the Innovator’s Dilemma as it relies on communities to drive the innovation forward not only on their internal teams. This makes the landscape of ideas more significant and very open to possibilities.

I really like this chart about how companies see the role of open source programs: 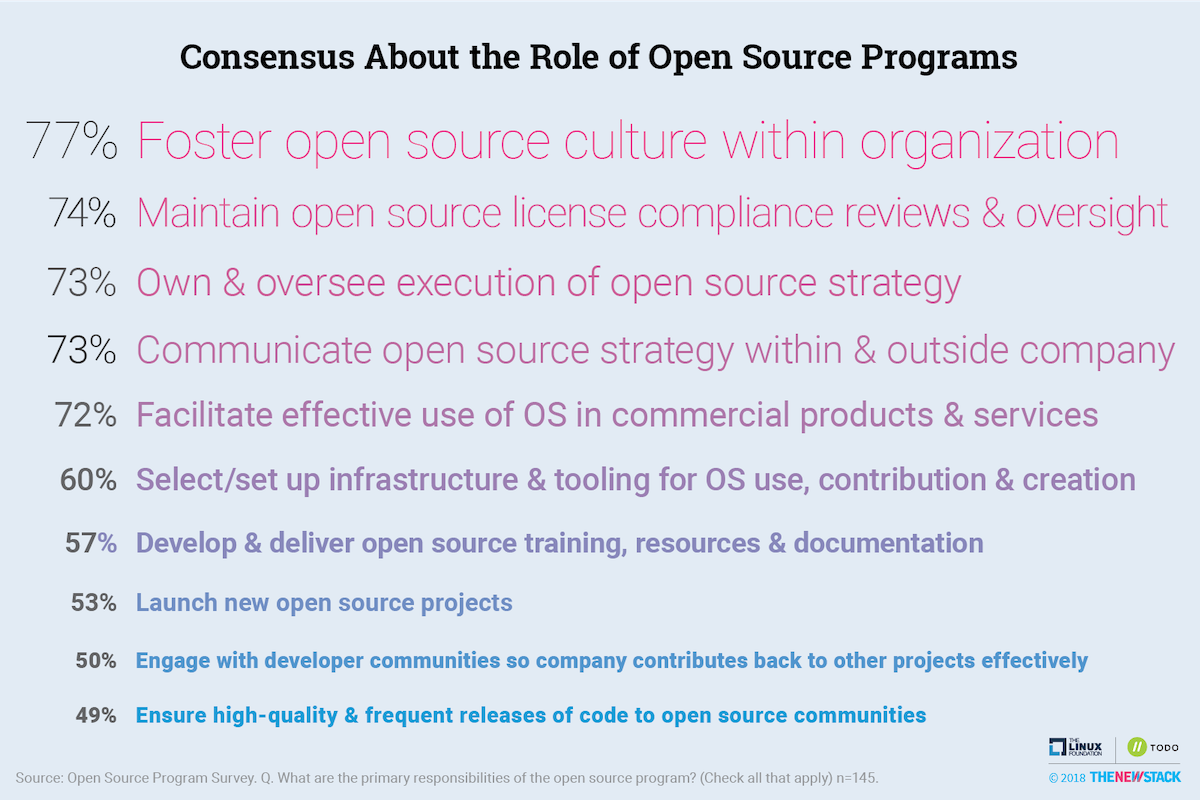 Here are the full description and links for the studies/articles I commented: